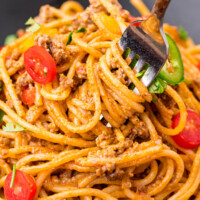 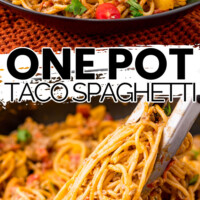 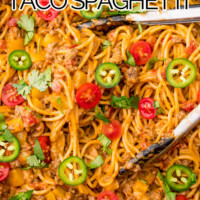 One Pot Taco Spaghetti is a creamy pasta loaded with ground beef, bell peppers, and taco seasoning that’s ready in less than 30 minutes!

Why We Love One Pot Taco Spaghetti

What do I need for taco spaghetti

PASTA: We’re using spaghetti for this one pot pasta. It’s thin and cooks quickly making it great for busy weeknights.

MEAT: I like to use lean ground beef since there’s less grease once it’s cooked and the flavor is better. (in my opinion) That being said 85/15 blend will work just fine too.

SEASONING: All you need is 1 packet of taco seasoning or 4 tablespoons of homemade seasoning. It has all the spices, herbs, salt, and pepper you need.

VEGGIES: Salsa, Rotel tomatoes, and bell peppers punch up the flavor of this pasta. Then garnish with some tomatoes, jalapenos, and/or cilantro. Or grab your favorite taco toppings and try some different combinations.

DAIRY: To make this pasta creamy and cheesy you’ll need sour cream or plain Greek yogurt and some shredded Mexican cheese blend. You could so use cheddar or Colby-jack cheese if that’s what you have in the fridge.

How to Make Taco Spaghetti

STEP 1 Add the olive to a large deep-sided skillet or a large pot. Once the oil is hot, cooked the ground beef until it’s browned, breaking it up as it cooks. Then drain off any excess grease.

STEP 2 To the same skillet you’re going to add the taco seasoning, bell peppers, and Rotel tomatoes with all the juices. Give that a stir.

STEP 3 Add the water and spaghetti to the skillet. You want to spread the past out on the top and then press down a little to submerge it. Bring everything to a boil, turn the heat to medium-low, cover the pan, and simmer for about 15 minutes.

STEP 4 Once the pasta is al dente, turn off the stovetop and stir in the sour cream and cheese until it’s melted. Top the pasta with some tomatoes, jalapeno slices, and cilantro, and then dig in!

Can you cook raw spaghetti in sauce?

Yes. The trick to cooking pasta in the sauce is to make sure there’s plenty of liquid for it to absorb. This can mean adding some water to the pot (like we did in this recipe) or making sure that there is extra sauce to soak into the noodles.

Even if the sauce gets diluted with water, it’ll be fine once the pasta soaks up the extra liquid. Just check the seasoning once everything is ready and add a little salt and pepper as needed.

What does simmer taco meat mean?

Simmering is cooking food gently in liquid just below boiling. There are bubbles, but not a crazy amount.

So why simmer taco meat? The ground beef is already cooked, but we want to get all that yummy taco flavor going. By adding the taco seasoning and liquid (ex. Rotel tomato juice or water), the beef simmers and gets a concentrated coating of the seasoning all over as the liquid evaporates. 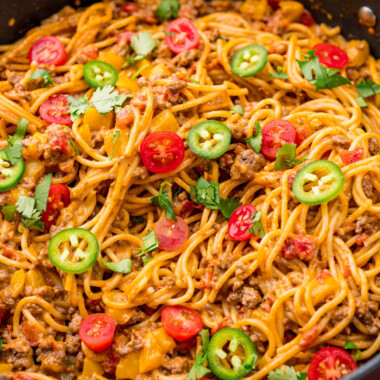