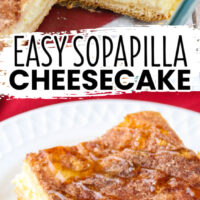 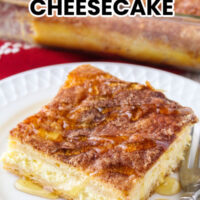 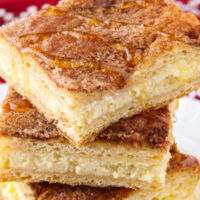 This post first appeared on Real Housemoms where I am a contributor.

Cinnamon and sugar have never been more magical together than in this easy-to-make, so satisfying to eat, Sopapilla Cheesecake!

Why We Love Sopapilla Cheesecake

Dough: You’ll need two cans of crescent rolls, preferably the full sheets, but if you get the perforated rolls simply pinch the seams together.

Spices: Cinnamon, sugar, and vanilla extract are the only spices needed for this recipe.

How to Make Sopapilla Cheesecake

STEP 1: Preheat your oven to 350 degrees F and grease a 9-inch x 13-inch cake pan with non-stick spray. In a small bowl, combine the cinnamon with 1/4 cup of sugar until it’s well mixed, and then set it aside for now.

STEP 2 In a mixer, beat together the cream cheese, egg, sugar, and vanilla until it’s smooth.

STEP 4 Pour the melted butter over the top of the cake and brush it all over the top. Then sprinkle the cinnamon sugar mix over the whole cake. Bake for 30-35 minutes, until the top is nicely browned and the sugar has caramelized.

STEP 5 Allow the crescent roll cheesecake to cool on the counter completely and then chill in the refrigerator for at least an hour before slicing into bars. We like to drizzle a little honey on top for that classic sopapilla taste.

Can you freeze sopapilla cheesecake?

You can wrap tightly and freeze Sopapilla Cheesecake but it’s best to cut the cheesecake into squares or bars before you freeze.

Can you make sopapilla cheesecake ahead of time?

Since you need to chill Sopapilla Cheesecake it is the perfect make-ahead dessert! The cheesecake lasts for about 4 days total so you can make it before you need it and then enjoy the leftovers.

Traditionally, sopapillas are lightly fried dough pockets that have been covered in cinnamon and sugar and drizzled with honey – think Mexican donuts. They can be topped with a variety of delicious toppings and are such a treat! 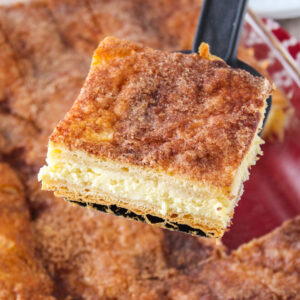