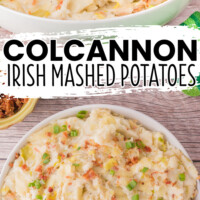 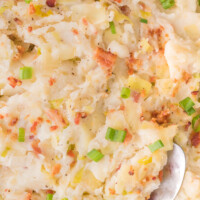 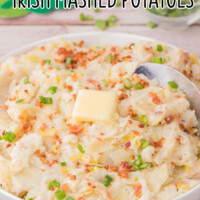 Colcannon combines some of the best Irish food, potatoes, cabbage & bacon, to make the perfect side dish for celebrating St. Patrick’s Day!

Why We Love Colcannon Potatoes

POTATOES: For this colcannon, you will need about 3 pounds of Russett potatoes, which is roughly 6-7 potatoes.

VEGETABLES: Grab a good-sized head of green cabbage and leeks, which are like large green onions that have a sweet, onion flavor, as well as garlic and green onion.

DAIRY: Butter is essential for colcannon. You will need unsalted butter for sauteing the veggies and a couple of pats to put on top of the dish. Heavy cream is also needed for really creamy potatoes.

BACON: Cook up and crumble the bacon before you are ready to start cooking the colcannon.

How to Make Colcannon

STEP 1 Place the peeled and cut potatoes in a large pot of boiling water and boil for 20-25 minutes, or until tender. Drain the potatoes and pop them back into the pot.

STEP 2 In a large skillet over medium to medium-high heat, melt the butter. Add the sliced leeks and cook for 5-7 minutes, or until they are tender and lightly caramelized. Add the garlic and cook for 1 minute and then stir in the chopped cabbage and cook until tender.

STEP 3 Mash the potatoes in the pot. If you like your mashed potatoes a little lumpy, don’t mash them too much. Then stir in 1/4 cup of the cream. Add more cream as needed until your desired potato consistency is reached. Season the potatoes with salt and pepper to your liking.

STEP 4 Once the potatoes are smooth and creamy, add the veggies from the skillet and stir everything together, folding in the crumbled bacon as well. Check the seasoning one more time and transfer the colcannon to a serving bowl. Top with some butter, sliced green onions, and bacon sprinkling them over the dish before serving.

What is the difference between champ and colcannon?

Champ and Colcannon are both classic Irish potato dishes, with a few minor differences. Champ is mashed potatoes mixed with green onions, or scallions, and milk, which is similar to colcannon. The difference between the two stems from the addition of cabbage or kale and bacon or ham in colcannon.

Is colcannon the same as bubble and squeak?

Colcannon and bubble and squeak are like food cousins- they have similar ingredients but are made differently. Colcannon is a soft, buttery mashed potato dish, whereas bubble and squeak is more like a potato pancake. For a traditional bubble and squeak, you can use whatever leftover potatoes you have, either mashed, roasted, baked, and so on, and add them to a skillet of sauteed veggies, where you press everything together, making a large veggie-potato pancake. If you’re having bubble and squeak for breakfast, it’s typically topped with a fried egg for a super-filling meal!

What to serve with colcannon?

Colcannon is a classic side dish that is frequently served with Corned Beef on St. Patrick’s Day. Colcannon is also delicious when paired with lamb chops, roast beef, and Irish Soda Bread. Don’t forget hearty stews and ham that are wonderful to serve with colcannon, especially when you’re looking for ways to turn leftovers into something great! 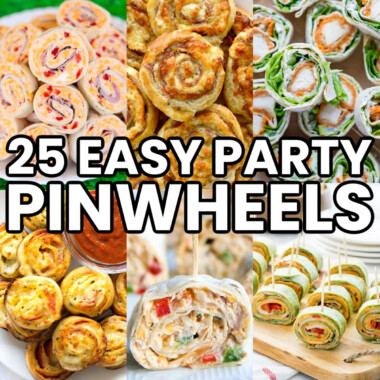