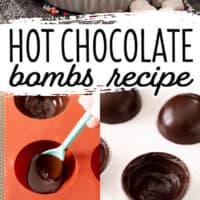 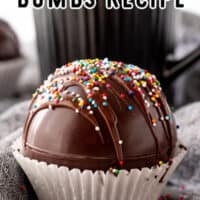 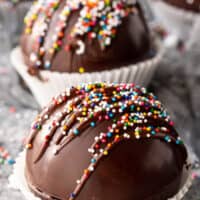 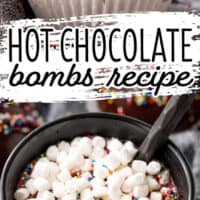 You’ve seen Hot Chocolate Bombs everywhere on the internet, and now you have a foolproof step-by-step guide to making them at home!

Why We Love Hot Chocolate Bombs

CHOCOLATE: High-quality chocolate makes a big difference in the texture, melting ability, and taste of your cocoa bombs. If you’re making multiple sets of these hot chocolate bombs, use 6 ounces of chocolate for every set of 3 bombs.

MARSHMALLOWS: You can pick up the regular mini marshmallows or find the fun novelty teeny tiny hot chocolate marshmallows in with the cocoa mix.

How to Make Hot Chocolate Bombs

STEP 1 Melt the chocolate in a microwave-safe bowl in 15-second intervals. If after melting and trying to stir in any remaining chocolate they just don’t want to melt, microwave for an additional 5 seconds. Once the chocolate is completely melted and at a temperature between 88-90 degrees F, stir in the unmelted chocolate to temper it. (This process makes the shell of the bombs shiny.)

STEP 3 Portion the hot cocoa mix and mini marshmallows into half of the chocolate cups. Use a warm plate to melt the edge of the rest of the cups and place the top “empty” cup onto the bottom “filled” cup. The melted chocolate edge will seal to the bottom cup, use your fingers to smooth the seam all the way around the bomb.

STEP 4 To decorate your hot chocolate bombs, drizzle some melted chocolate on top and add sprinkles. You can use any color or themed sprinkles you like. I’ve even used white chocolate for the drizzle on top for a little color variance.

STEP 5 To make hot chocolate, place a hot chocolate bomb into a marge mug. Heat some milk in a small saucepan over medium heat just the edge just begin to bubble. Pour the warm milk over the bomb and stir until everything is mixed together. I like to add extra marshmallows on top too.

How long are Hot Chocolate Bombs good for?

These hot chocolate bombs are best consumed right after making or within 24 hours. That being said, all the ingredients are shelf stable. So really they’ll last as long as a bar of chocolate would, but I’d recommend keeping them in the fridge and using them within 1 month.

Where can I buy hot chocolate bomb supplies?

These days you can pick up the supplies for hot cocoa bombs just about anywhere including big box stores like Walmart and Target, grocery stores, and craft stores. You will often be able to purchase hot chocolate bombs there and at boutique shops and bakeries, craft shows, and from retailers online, but let me tell you: it is MUCH less expensive to make your own!

What is a hot chocolate bomb?

A hot chocolate bomb is a hollow chocolate sphere filled with hot cocoa powder, marshmallows, and fun add-ins like candies and sprinkles, and you place one in a large coffee mug, then pour hot milk over it and watch it melt and then fall apart to reveal the cocoa mix inside, stir to have delicious and creamy hot chocolate. 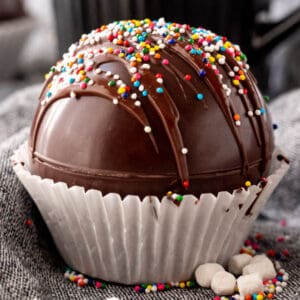